Two tickets to the gun show

Twas the blog before Christmas...
First of all; please excuse my lack of blogging for the last couple of weeks. I could make up a lame excuse about being busy with pregnant wife/kids/holidays whatever...but the truth is I just did not feel like it.
The season competitive cash season was long and not particularly fruitful this year...the team account finished well in the red. And we definitely lost some extremely frustrating and disappointing games. When things are not going well, competitive curling almost feels like a job.
To sum up our season - we had some good moments, but we lost 3 C-qualifiers, which all together total about $10,000 worth of defeats. But more importantly, we lost games that we should not have lost. If we had lost to teams curling 100%, it would somehow feel a little less painful. But that is not how we lost. We lost by making mistakes - by choosing the wrong shot, by missing the wrong shot, by miscalling line. With all due respect to the teams that beat us: we beat ourselves.
So, in short, I needed a couple of weeks to not think about competitive curling - to not think about the fact that we now have to play down in a very tough west regional playdown to get to provincials - to not think about what we need to do different next time we step on the ice to keep from defeating ourselves.
So I tried to remember that curling is fun. I played some ladder games in the club. I practiced. I remembered why I love this game so much. I made some shots, I missed some shots. We won some games, we had some drinks. It is good to remember that curling is about making shots, at whatever level you play at. There is an understated elegance to a perfectly executed curling shot; it feeds the ego with a sense of accomplishment. I think this is why the “On purpose” CCA commercial works so well. It just feels good to make shots.
I believe it was Pitbull (an honorary member of Team Fournier), who while providing backup vocals to Enrique Iglesias, so wisely stated: “You gonna like how it feels”.
Oh Pitbull, will you ever cease to provide us with your eternal wisdom?
***
So what has been going in the curling world since I last blogged?
First of all, Jean Michel qualified in the Grand Slam. For those who do not follow curling that closely, let me tell you that this is HUGE. The Slam features a who’s who in World Curling. And JM proved that he belonged there, losing a tight game on a measure to eventual winner Mike McEwen of Winnipeg in the 1/4 finals. This is a great result for these guys, who now are by far the favourites heading into Quebec provincials this year.  (by the way - shame on the CBC who missed the opportunity to show the McEwen-Menard game, instead of yet another Stoughton/Martin game).
Joëlle Sabourin also had a big win. She is playing 2nd for Jennifer Jones, filling in for Jill Officer while she is in the family way. They won the Canada Cup of Curling – a big CCA event that features most of the top teams in the country.
And it’s always nice to see Joëlle on TV. And check out those biceps! Christmas gift suggestion: 2 tickets to the gun show! 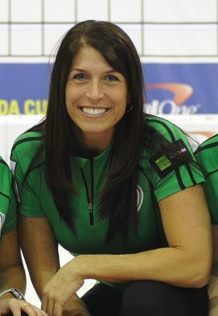 ***
5 rocks?
Other big news in curling is the 5-rock rule. The Grand Slam experimented with the 5-rock free guard zone, meaning that the team with the hammer gets to put a 2nd unremovable guard up if they so choose.
The big impact of this is a team with a lead will have a more difficult time peeling out a game, as the opposition is guaranteed at least 2 guards per end if they choose. I think it will reward teams that can make runbacks and freezes.
Predictably, at the Grand Slam it amounted to a lot more rocks in play and some more offensive curling – which is all good news as far as I am concerned. It definitely makes it harder to play defence, but here is a bold prediction: the best teams will find a way to win with this rule as well, just like they did with the 4-rock rule.
Suggestion to all curling clubs: play the last round of your league with the 5-rock rule this year – it is surely coming soon – and it will give everyone something to talk about.
***
So what is next?
Regional playdowns are set for Jan 6-7-8 at Glenmore and I believe Etchemin. This year's participation is at an all time low (which I will talk about in a later blog) - with 12 teams at Glenmore and 8 at Etchemin, playing for 4 spots in each region. The low particpation does not make it any easier for us; the West playdown features 12 pretty strong teams (if you include us!).
***
A very Merry Christmas to all of my loyal readers.
I will surely blog after the holidays as we head into regional playdowns and then provincials. In the meantime, wish us luck! Or more importantly, wish us fun.
Posted by Mike Fournier at 9:38 AM 3 comments:

Back from Charlevoix...and looking forward to over a month off from competitive curling.

Once again - Charlevoix provided me with disappointing results - lost the C-qualifier to Serge Reid in a very disappointing and frustrating game. We gave up a brutal steal of 4 in an end that looked very promising, and quickly turned into a nightmare.
So I say again - SCREW YOU CHARLEVOIX.

I won't go as far as to say that I will never go back, because, deep down, I know I will.

Speaking of frustration  - I was thinking about this...
Is there any sport that can match curling in terms of sheer ability to frustrate you?
Golf can be frustrating  - and I have wanted to fling a putter or two in my life - but for my money - curling wins hands down. I think its because the difference between glorious success and complete failure is so small:
A takeout that ticks a guard by 1mm is completely useless - but if it gets by it is a perfect shot...
Golf seems far less arbitrary.

Johnny the Hammer Chow (aka Terence Yip) was in Charlevoix this year. He stars in a cool ad campaign that the CCA has come up with to try to get people curling...

Apparently these are also available in French  - and we will be seeing more of these...

Charlevoix was surprisingly won by Brad Gallant from PEI. This is poetic justice for all of us that made fun of Eddie Mackenzie, the horrid 1-10 PEI team from last year's Brier. I think we got the Islanders mad at us...Gallant knocked off Brad Gushue in the finals.

Here is some random venting. To all tournament organizers out there:  First of all - thanks for all of your hard work - BUT
CAN YOU PLEASE REMEMBER THAT SOME OF US HAVE JOBS!!!

Every spiel we play in now seems to start earlier and earlier. Charlevoix started teams at 7:30am Thursday this year. More than half of the teams were out by Friday night - Saturday morning at the latest. Only four teams play Sunday.
I did not study the open draw - but I hear it was just as awful.

I like curling - but if every spiel costs everyone 2+ days of vacation - then don't be surprised that participation is down. Charlevoix has been getting away with it because they do so many things right - but I heard a lot of complaining this year.

I seem to remember a few years ago, curling was an activity that you could play on weekends.

A new era is starting in Quebec this week. RDS2 will begin broadcasting curling - and lots of it. RDS2 is set to broadcast over 100 games this year (I did not know there were more than 100 games to watch)
The Canada Cup kicks off this weekend, and will feature the usual suspects curling for cash this weekend - and RDS will cover the semis and finals.

This is a new opportunity for curling in Quebec - where the sport is - let's admit it - in rapid decline.

While the Olympics have given curling a great deal of exposure in the last decade - this exposure has not translated into participation. Curling needs a boost. And a bunch of people watching on TV has potential.

Here is hoping that Guy Hemmings and whoever else broadcasts the game can add colour and excitement to draw in viewers - and to convince them that they should try this sport.

The art however lies in getting people to join, not just try. Curling Clubs are very good at setting up "Come try curling for a day" events, but are notoriously bad at converting trials into memberships. It is easy to get people in the door - but clubs are not set up to get them to stay.
Too often - new members get thrown into crappy leagues on crappy teams with people who suck at curling, and are left to try to figure out the game for themselves. Not only that - if somebody walks into a curling club now - they will likely be told that the leagues have already started for the year, so come back in September.
(I am speaking in generalities of course - some clubs integrate new members very well).

So tip for curling clubs - don't try to organize "Come try Curling" days until you have seriously thought about how to seal the deal. Curling on TV presents a real opportunity to grow our sport. Let's not screw it up!

So from now on - our team is no longer Team Fournier - we are now Team Fournier featuring Pitbull. I will get him do do a little rap before we start each game.

"Yo - all you mother F&?&*ers on the curling sheet -
Took me all season to get my life unstuck-
Now Team Fourniers gonna run over you like a Tonka Truck."
Posted by Mike Fournier at 10:51 AM 2 comments: