"Dad, Russ Howard is Licking Himself Again!!!" An Isolation Blog

After 6 weeks of isolation, I have come to the inescapable conclusion that I miss curling.

I miss throwing practice rocks. I miss the taste of a pre, post or mid-game rye and coke. I miss my teammates, both my competitive guys and by hall-of-fame great club team.

I miss staying a bit too late after a Tuesday game. I miss throwing a few extra draws at the end of my lunchtime practice to make me a bit late for a meeting at work. I miss showing up early for a ladder game, and hanging out at the end of the bar listening to whoever had a curling story to tell about their weekend. I miss gossiping with the club manager. I miss the Glenmore Intermediate, an event that usually would have occurred last weekend and would have helped ease the transition into spring with the help of dancing, karaoke, Jello shots and late night poutine runs (and curling).
After our competitive season comes to its end, (unfortunately in January for the past 2 seasons) I curl from February to April only because I love it. And losing it this year has made me appreciate it that much more.

All that to say that I miss curling.

Of course, I miss other things too, like leaving my house, seeing friends or playing soccer. But with curling, next season just seems so far away, and I am not sure I will have my usual summer distractions of golf, soccer and the city pool to keep me busy until then.

The question everyone seems to be asking themselves these days is when this will get back to “normal”. When we will be able to enjoy the things we did before, without feeling like we need a hazmat suit? And what will next curling season look like?

I do not profess to know for sure, nor do I have any inside information on this, but here is my take:

First, we will not have vaccine by the fall, and most of us will not have had the virus yet. Therefore, a big part of the population will remain vulnerable. Therefore there is no way things will be back to normal. Sorry to be bearer of bad news if you had hopes of this ending soon, but it won’t.

I think we will have a season next year. But it will be vastly different that what we have seen before.
On the competitive side, I cannot envision travel getting back to what it was before. Teams from all around the world were flying across Canada from September to May to curl. There is no way this can happen next season. Curlers are like traveling germ salespersons, and as the virus flares up in different parts of the country, travel restrictions will inevitably follow. Travel will need to be much more sporadic, and more teams will be playing more spiels that are within driving distance, and in their own cities and provinces.
While the slams and big events will happen, I think we might see them being smaller, and played without crowds for TV only. The fact is, a big part of curling audiences are older, and those people will be less likely to want to gather in arenas to watch. Holding events for TV will involve a different set of economics for the game, but the reality is that TV is still where the big money is, and curling on TV without spectators will be better than no curling at all. Will the Brier be the Brier? I have no idea.

At the club level, curling will happen but with a strict set of rules. Ice techs will be wiping off rocks with Lysol every game, it will become part of doing the ice. The pre and post game handshakes will be things of the past, and I am not sure if we will be sitting together after games. I really hope I’m wrong here, but the idea of eight people sitting around shoulder to shoulder, especially given that about 30-40% of our ladder is of senior age, seems unlikely. At very least, many will stay away. If you were a member of a struggling curling club before, I would worry about their capacity to survive next season, given that bar revenues will be down and some more vulnerable members will not want to join.
Whatever happens, it will certainly be different, and will feel mighty weird. But I much prefer a weird curling season to none at all, so we will all have to adapt.

So how is the isolation going you ask?
I think we are all getting a bit squirrelly in the Fournier household.
I ran out of rye today, and the lineup at the SAQ was around the block, so I have resorted to drinking the little mini-bar samples I have collected over the years. I found a mini bottle of Screech I got from Team Newfoundland from the 1996 Canadian Mixed Championship. It was spectacular, and made me yearn for a fish to kiss.

My wife and I are both fortunate enough to still be employed, and are working from our home office while simultaneously failing miserably at home schooling our kids. Like many of you I often take videoconferences in pyjama bottoms, and am perpetually getting interrupted. I took a call from my boss last week while dodging Nerf gun bullets.
But I still consider us as “lucky” as we still have jobs for the time being. And for those of you on the front lines dealing with this every day, I have nothing to say but a sincere thank you.

Sure sign the isolation is getting to me: last week we decided to adopt two cats after succumbing to ridiculous pressure tactics from my daughters. Sadly, they already had names, and I could not convince my daughters to rename them after famous curlers.

Having my daughters say:  “Mom, Kevin Martin coughed up a hairball and Russ Howard peed next to the litterbox again” would have made my week, but alas, no. They are Seema and Stedman, pictured here. 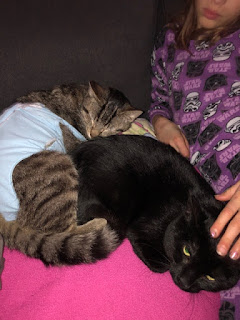 Did I mention I miss curling?