If Han Solo played in the Mixed....


Tough weekend in Gatineau. Played reasonably well, but came up just a bit short against Mark Kean in the C-Qualifier.
For those of you who don’t know what a C-Qualifier is – it is basically your last chance to make it to the money round of a big tournament. Many tournaments are triple knockouts; that is you are alive until you lose three games, then you are out. The last eight teams alive get to play in a single knockout event on the Sunday, with the quarter final losers getting $3500 in this case, and the winner pocketing a cool 10 large.
So basically, the C-Qualifier is as close as you can get to making money without making money. So losing a C-Qualifier feels like getting kicked in the balls with a  pair of steel-toed work boots. We did not play badly, we were actually 1-up coming home on Kean (who is on paper the #9 team in Canada right now), but I missed a key shot, and we lost.
The spiel was eventually won by Brad Gushue. The only other Quebec team to have fared well was Jean-Michel Ménard, who is tuning up for his upcoming Olympic trials. He lost the semi-finals to Rob Rumfeldt from Toronto.

Some random observations from a weekend spent in an arena:

- Where have all the Quebec teams gone? In a spiel held in Gatineau, only 5 of the 32 teams were from Quebec. Shocking. Are there really that few curlers left? I played teams from Ottawa, Nova Scotia, Manitoba and Toronto.
- There was a woman’s event, and an open as well. I must say however that the draw is kinda weird: Each play in a 3-game round robin with only the winner of each pool advancing. Inevitably, everyone at 2-1 finishes tied, and then shootouts are required to determine who plays on.  So in other words, you drive to Gatineau, win two games, drop a close game, and you could be going home.  I think they need to fix this. Maybe drop a team and have 3 pools of 5 instead?
- Quebec teams seem to be struggling a bit this year. Reid, Lemay and Desjardins made only brief appearances at Gatineau, not playing particularly well in any of the games that I saw. Gagné and Gagnon took the weekend off.
- Had fun watching Brad Jacobs lose to Ménard. Lots of broom banging and roid-rage going on. (I am joking – I believe that Jacobs and team are of course clean – and they were actually randomly drug tested by the CCA this weekend!)

On a side note, I still find it funny that curlers need to be tested for performance enhancing drugs. Reminds me of a story: in the  selection process for the 1988 Olympics (where curling was a demonstration Sport), curlers were sent to an “orientation camp” where the CCA evaluated the top culrers of the time. While at the camp, the players were asked to  fill out a questionnaire.
So John Kawaja (3rd for the Great Ed Werenich) sticks up his hand and asks the CCA Official:
“Excuse me. Question 17 asks if we have ever used any illegal drugs. Is marijuana considered an illegal drug?”
CCA Official: “Yes. Of course.”
Kawaja: “Ok thanks.”  - long pause...
Kawaja: “Ed wanted to know!”

The Quebec Curling Tour Championship is this weekend in Trois Rivieres. The top 4 seeds are Menard, Ferland, Lemay and us. This is essentially a mini-Quebec provincial, except I am there! Will try to avoid the kick to the balls with the steel-toed workboot this weekend. Usually, the women’s tour championship is on at the same time, but the event could not attract enough teams to be held, with competitive teams preferring to play in Kemptville.
The event starts Holloween night. My absence from the home on Halloween will surely not help in my candidature for father of the year. Special thanks to my wife for picking up after this one. Competitive curling is definitely rough on the household this time of year, requiring inordinate sacrifice from spouses and in-laws.
As for my Halloween costume, I will once again dress as a bald toe-tucking curler; Jonathan Mead. I just have to figure out how to look shorter.

Looking forward to the Mixed
Thanks to all at Glenmore who came out to our fundraiser for our mixed team! We now have some off-ice winter jackets that make me look like Han Solo in the Empire Strikes Back. I think I will get Kennedy to carry me around all week on his back! Might look like this: 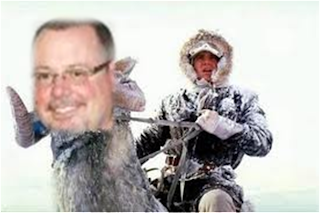 The Mixed will be held at the Rideau Curling Club in Ottawa, Nov 16-23. For those keeping track, I will have been to two Nationals – total distance from my house 200km. The results can be found at www.curling.ca as usual.

The Mixed is an excellent reminder of what is great about curling. It is a competitive sport, played by competitive people, but with a great deal of sportsmanship and fun. The on-ice is intense, challenging and fun to watch; the off-ice is social, entertaining and also fun to watch.
Posted by Mike Fournier at 4:08 PM No comments: