Applying for a Job: Skip of Team Canada!


So Kevin Koe managed to lose his last three games at the World Championship, getting pretty soundly beaten each time by some solid European squads. So they return home from Beijing without a medal.
I have seen the CCA site trying to put a positive spin on this by saying we are the only country to have finished in the top 6 in every world event. Really? This is sad.
I know they will not admit it, but surely the fact that they had already publicly parted ways before the final clearly had an impact on their performance. They looked drained from the week, from the season and from the past three years. As I mentioned last week, the pace required to play at an elite level is now somewhat grueling, and it showed.
Apparently, the 3 guys left on the team after Koe forms his new team (Simmons, Rycroft and Thiessen) are planning on sticking together, renting a skip and playing 3 or 4 events next year, including the Brier. Wow. Quite the Team Canada! I am sure this is exactly what the CCA had in mind when it hatched up relegation and the Team Canada spot.

But anyway – here is my quick note to Nolan, Carter and Pat:


I hear you guys are in need of a skip for next year at the Brier, the Canada Cup and whatever other free events that you can get into! Please allow me to offer up my services as your new skip. I have attached my CV, as well as letters of reference from my Mixed team, as well as a guy I won the Lachine Curling Club Turkeyspiel with 11 years ago. I have also attached a Team Pic - just to show you guys how good we would look together! 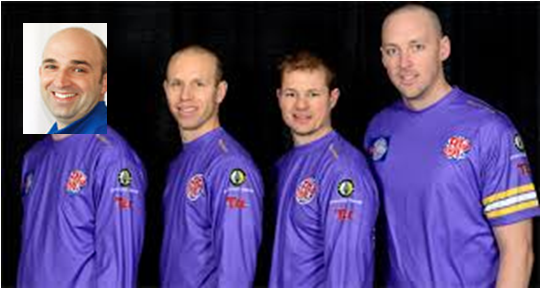 I am not a bad curler, and I can bring to the team the level of hairlessness to which you have grown accustomed from your skip. While I do not have the pedigree (pun intended) of a Kevin Martin, or the stylish hair of a Jeff Stoughton, I can definitely add some “je-ne-sais-quoi” to your team.  Plus I look good in red!


I mean who are your other choices?


Kevin Martin? C’mon, he is a has-been. You might as well pick up Randy Ferbey!  Did you see that in-turn hit he dumped against Morris in the Trials? Rachel Homan peels better.


Stoughton? Bah. His inturn looked more like he was throwing a Frisbee at the beach at the Brier this year!


Morris? He is taking the year off to go to fireman school! (where you apparently learn how to pump iron and pick up women from your fire truck)


Howard? He is starting his new career as a TV actor! Way too busy to curl.


Brock Virtue? I hear he is in anger management for a year.


Brad Jacobs? You guys are not beefy enough to lure him away from his current monstrous team. (although Nolan is pretty big)


And everyone else is busy!

I have been invited to play in the Kurl 4 Kids celebrity bonspiel next weekend in Oakville! Unlike the Montreal event, the Toronto edition is kind of a celebrity pro-am, where fundraisers get to play with celebrity skips after having raised piles of money for local children’s hospitals (as well as the Sandra Schmirler foundation).
And guess what, I am a CELEBRITY SKIP! Wow! I have made it! (I knew that guy following me to McDonalds yesterday was a member of the paparazzi, not a homeless guy looking for a cheeseburger). I can promise you all that now that I have become a famous celebrity, I will not forget all the little people who helped me make it. Does this mean I will be recognized when I go to Walmart? Will I have to start wearing giant bug-eye sunglasses in public? Oh, the high price of fame!
Seriously, I am thrilled and honored to be invited, and always happy to donate my time to help out a good cause.
I have looked at a list of some of the other celebrity skips, (including Jamie Koe and Jamie Korab) and I am very worried that the weekend will likely be as much about liver damage as curling. Ah the sacrifices we make.
So if you FORGOT or were uninspired to donate to my Montreal Kurling for Kids team two weeks ago, you can make up for it now by donating by clicking on the link below. The money raised will go to the Sandra Schmirler foundation whose mission is to help fund Neo-Natal Intensive Care in Canada. Having spent 6 weeks in a Neo-Natal care unit with my son when he was born, I can tell you that this is a cause that is dear to my heart as well, so give generously!

What the Olympics have done to Competitive Curling – Part Deux


What the heck is going on? Where is everyone going?

Somewhat shocking news in the curling world this week:  Johnny Mo, after finishing as bridesmaid at the Brier and at the Olympic Curling Trials has decided to hang up his curling shoes (for a season at least), in order to focus on his firefighting skills.

This after Alison Kveviazuk (the 2nd on Rachel Homan’s team packed it up and moved to Sweden). And after it has become known that Carter Rycroft and Nolan Thiessen will take some time off from the game to focus on business, family or whatever.

No word on what Stoughton, Martin or Howard will be up to next year, with their teams having disappeared beneath them.

Why all the changes? Why all of the retirements?

A lot of change was to be expected in the season following the Olympic Trials. But this seems a bit crazy.

Why are people quitting, or at least taking a sabbatical? Quick answer: because competitive curling has become insane. While only a few teams can make a living at curling alone, (and few even try), the competitive curling season has become such that no reasonable person with a job or a family can possibly keep up with it on an ongoing basis. Imagine you are a top notch Canadian curler. With a wife and kids... And a decent job. Here is the requirement of your curling commitment (in a non-Olympic Year):
Total: 6-7 weeks of vacation required to curl

Then you need to practice. Pretty much every day you are not curling in a spiel, you should be throwing – let’s say 1 hour per day.
Then you need to be physically fit. You need to be at the gym at least a few times per week – likely more if you are front ender.

This does not leave a lot of time for family, actually working at your job, friends outside of curling.

Here is the rub: you can do all of this for 3-4 years, and still get nothing out of it, because someone has to finish in 2nd place (and 3rd, and 4th).

So we have created a curling season aimed at producing the best curlers to compete internationally, but have we also created a curling schedule that almost seems designed to burn out the best curlers? I guess the guys who are taking time off will likely come back to the game once they have recharged their batteries, but watching Koe this week at the worlds it almost seems like they are on automatic pilot. They look tired. They look drained. They look frustrated when things do not go their way – not sure they will win. I hope they do. These guys are insanely good, but when you look at how much they have curled, you have to wonder how much more can they take?
Was it an accident that the team that represented Canada at the Olympics was really the last team at the party...the last team to earn their spot at the Trials (and maybe the least burnt out?)


Questions for discussion (and I am not saying I know the answer):

Are we burning out our top curling teams?
Is this the best way to develop the game, and to develop curling in general?
Has competitive curling become inaccessible to all but a few "professional" curlers who make the choice to devote their lives to the game?


I am certain that team changes and people stepping back will always be part of curling, but this year in particular seems to highlight some of the flaws inherent in our way of thinking about how to manage competitive curling.
There will always be some players/teams that have the time/lifestyle/sponsorship to go all-in for some period of time, and I definitely think they deserve to reap the rewards from this sacrifice.

I always used to love the fact that you would watch the Brier, and the players would all have a "profession" outside of the game. There were mailmen, firefighters, teachers, dentists, accountants, students. Are we moving towards an era where the only "professions" will be golf pro / professional curler?
Posted by Mike Fournier at 11:05 AM 2 comments: