Brier Recap; and why I suddenly feel the need to Navage my nose.

I really wanted to have something to rant about. Relegation, Team Canada, broomgazzi, the CCA (or its new moniker: Curling Canada), TSN dissing the Quebec Team.

But I have to admit it: I just thoroughly enjoyed the hell out of the Brier this year.

I was worried heading in. Maybe Warren Hansen was right, and the Brier is just not that big a deal anymore. the Canada Cup and the Slams offer better curling.

In the end, curling saved the day. The games provided all the drama, the tension and the strategy and the excitement that the sport can offer.   Once the Brier reached the playoffs, all the games became epic contests coming down to last rock, with drama and exquisite shotmaking. It was a Curling fan’s dream; it was emotional, and was won in an extra end with a draw to the screw. 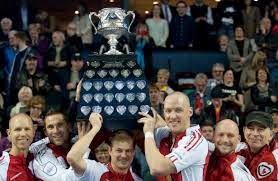 Some random thoughts, in no particular order:
So on this subject, I have to ask…

Why do we hate Brad Jacobs So?

I was watching the 1-2 game Friday night between Brad Jacobs and Brad Gushue. It was an awesome display of curling. There were triples, button draws, touch doubles, drama and excitement right until the last shot.
I was also sitting with my iPhone; reading people’s comments on Twitter and Facebook every so often who were also sharing their impressions of the game. And what did people talk about the most? Was it the great shotmaking? The triples? The sweeping? The fan reaction? Nope, they were talking about how Team Jacobs reacted to making a semi-tough shot for 3 in the 5th end, and how obnoxious their reaction was.

I can't find a link to it...so let me describe it:

It seemed like a cross between an NFL end-zone dance, and a woman going through childbirth. There was guttural, primal screaming; there were clenched fists. There were high-fives that looked like they would have broken my wrist. There was grunting that sounded like my bathroom on a Sunday morning after an all-day Saturday visit to a cheese factory.

The way this team celebrates has polarized much of the curling world.  People hate them. Some love them, but lots of people hate them. They certainly did not win any fans with the classless and disrespectful foot banging against Kean, and probably lost a few more with their over-the-top celebrations against Gushue in the 5th end. By the time they were in the finals, Facebook posts and tweets all seemed unanimous in hoping that Simmons teaches Jacobs a lesson.
I must say that their celebrations turn me off.  But maybe I am a little too old-school. I come from the Vince Lombardi school of celebrating. Lombardi was the Green Bay coach who famously told his players; “If you manage to get into the End Zone, act like you have been there before.”
Watch this one: Laycock making a sick double-raise-double to keep his team in the game. Check out his celebration after. Classy.

The pro-Jacobs camp will surely say that this team is reaching out to a new generation of fans, raised on highlight videos of the best goal celebrations and reality TV – where over-reaction is a requirement. They will say that they are hated because they are winners. They will quote Taylor Swift: “Haters gonna hate, hate hate.” Maybe I am a just a hater.
But I don’t have the same negative reaction to watching other great teams celebrate - like Gushue. Or Ménard. Or Stoughton. Or Howard. I did not feel weird watching McEwen and team go crazy after he made the best shot of the season earlier this year. But when Jacobs and the Brush Brothers go crazy, I just want to puke.
I think my discomfort comes from what I hold dearly about curling, and the values that are built into the game's unwritten etiquette.
Maybe I look at sports differently now that I have kids. But one thing that I look for in a sport is what traits it helps you develop as a human being. I have learned a lot in curling, and from the many people I have played the game with or against. Here are some life lessons learned:

By no means do I suggest that all curlers are perfect. We have all been assholes at one time or another. But I know when I have been.  And if I don't, there is usually someone is there to call me on it.


Somehow the game’s etiquette has always been kept by its venerable leaders; the respected old-timer (that every curling club has one or two of) who shakes his head when you slam a broom, or celebrate too wildly. I grew up worshipping guys like Hackner and Lang, Stoughton, Ryan, and Folk. None of these guys would have gone crazy after a tap-back in the 5th end of a tight game. None of these guys ever thought they were bigger than the game. I never heard any of them say anything like “We are changing the face of curling”.

I am not sure the face of curling needs to be changed. And if it is to be changed, it probably should not be changed for a squinty, angry weight-lifting scowl.

Anyway - once again the Brier proved that it is the ultimate curling event, and despite its flaws and issues (like relegation); is still the greatest showcase for the sport that I love.
Posted by Mike Fournier at 11:07 PM 21 comments:

Broomgate!
In case you missed it, the Brier internet world is all abuzz over Ryan Fry and the Harnden’s moving or whacking Team Ontario on a few occasions to keep them from making flat spots on the ice with their hands / knees. Before everyone started talking about it – I was freaking out watching the game on TV. I believe my exact words were: “What a bunch of ass-holes”.

A story:
My former 2nd, Brad Fitzherbert (who played in a couple of Briers), used to get mad at guys who spent too much time on their knees. He would politely warn them a few times – and if they kept doing it, would say that next time he would lift them off the ice (Brad was a pretty strong lad). I saw him do it a few times (but I can’t remember to who). But here is the important thing; he was never a dick about it. I never heard anyone get mad at him. He was sportsmanlike about it.

But Fry / Harnden were not nice. They did it in a petty and aggressive way. And they did it to a team that they knew was probably a bit nervous at the time. It was a hostile and unsportsmanlike move, and FOR SURE was intended to intimidate, and to make matters worse it seemed to have worked!

Jacobs and Team are always eager to say how they are changing the face of curling.
However "Changing the face of Curling”, should not be about making curling less sportsmanlike.
Today they put out a bullshit non-apology/apology on their Facebook Page blaming Kean’s Team for flat spots, and completely missing the point.

Come on boys – you should know better.
Posted by Mike Fournier at 10:51 AM 4 comments: