Life on Mars - we have Proof!

First off, apologies for not writing blogs very often. It seems that the combination of curling competitively, raising three kids, holding down a job, and trying to remember what my wife looks like have been keeping me rather busy this season.

So we are already 5 spiels into our season, having just come from Gatineau this weekend.

So far – my new team is awesome and I am ecstatic with how our season is going. For a new team, still learning how to play together, we have managed to win our fair share of games (including a run of 13 wins in a row!), and managed to put a few $$$ in the bank to offset the cost of the season.
We won a spiel in Ottawa, lost the finals in another, and were a game away from qualifying in the other spiels we played. All in all, a great start so far.

So I took a look around this year – and realized just how much the competitive curling scene has changed in the past few years.


So the game is different, but still a lot of fun. We fell a game short of qualifying this past weekend in Gatineau – but I still love it; the teams, the competition and the curling.

The spiel was eventually won by John Epping, defeating the young and fuzzy Matt Dunstone in the final. Epping is one of the top teams in the World right now, and it was great to see them picking up Craig Savill to spare, fresh off having kicked cancer last season. Nice to see him back on a curling sheet and winning.

Quebec Teams did fare particularly well. I believe we were the last Quebec Team alive (Ménard lost the other C-Qualifier about 10 minutes before we did), and many of the Quebec teams were out early on Friday.

There were lots of interesting teams to watch – from Jason Gunlaugsson playing with ¾ of Matt Dunstone’s junior team from last year, to Brad Gushue’s team continuing to play well without Brad – as he recovers from a mysterious hip injury. We also got to see Matt Dunstone up close kicking our ass. This is a very good team.

Another awesome sight this weekend – a Quebec curler who I shall not name, whammed a broom after missing a shot, and shattered the shaft. Under the new sweeping rules, you are not allowed to change brooms during a game, so this player found himself without a broom as of the 3rd end. He then proceeded to call the game with his feet, doing a complex tap-dance to call shots and he slid without a broom. It was highly entertaining –and a good reminder to the rest of us that we should now take out our frustrations in different ways.

Next up:
The Quebec Curling Tour Championship is at my home club of Glenmore next week (Nov 3-4-5-6)! So for our fans this will be the only chance for you to see Team GSOFT in action around Montreal.
We likely start next Thursday at 9:30PM.
Follow us on Facebook at:

Just when you thought it was all settled – Broomgate is back. Like a decrepit Halloween zombie emerging from the grave refusing to die, the discussion continues.

“But Mike – you promised it was over!”  Trust me, I feel your pain.

Well the good news is for competitive teams – it is over. The rules for WCT and CTRS events are quite clear – you need to use a broom with no insert, and with the approved mustard-yellow fabric. No discussion – no debate. I have heard precious little rumbling on the competitive circuit about it at all this year.

Now the battle has dropped down to the club level – and to the “Open” type tournaments.
At the club level – there is still ugliness. Goldline issued a statement advising clubs that they should set a policy, that basically says anything goes except Hardline brooms! They then show this picture as proof that Hardlines damage the ice: 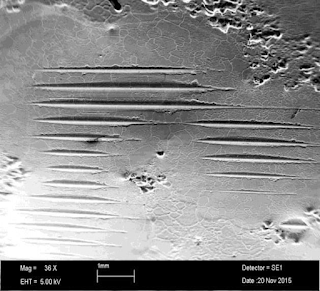 I believe this picture clearly indicates that there is life on Mars. Or it is a picture of the skid marks in my shorts after mixing rye and coke with all-you can-eat sushi.

Seriously- I guess all the manufacturers are trying to navigate this issue as well as they can, but discouraging clubs from buying your competitors brooms seems like a shitty, duplicitous and wrong thing to do. I have seen club-level curling with Hardlines at our club for years now – and you cannot convince me that these are damaging the ice in the hands of club curlers (who are presumable not changing pads every game!).

Here is the skinny:

If you are 90% of the curling world – people who play in their club in a league for fun - use whatever the heck you want. Hardline, Goldline, a Swiffer, a Brownie, Strawbroom, a Hairbrush. The subtle differences in broom technology do not affect you. Of course, I highly recommend Hardline brooms (shameless sponsor plug! :-)) which are lighter and faster than competitors!
Clubs should remain vigilant that players are not using home-made solutions that are closer to sandpaper that might destroy the ice – but other than that – it should not matter. And the rules edict from Curling Canada confirms this.


The basic guideline for any play where the mustard-yellow fabric is not required is what I like to call the DON’T BE AN ASSHOLE rule.
Some examples:
• If you are a club curler, but you are an ex-CFL linebacker and you sweep with a new illegal pad which you change every game – then you are an asshole. Don’t do this.
• If you break out 4 brand new sharp pads before your club final – you are a bit of an asshole. Don't do this.
• If you are a semi-competitive team playing in an open spiel, and you are aggressively directional sweeping with an illegal pad, you are being asshole-ish. Don't do this.

If you consider yourself a semi-serious curling team and you are trying to get somewhere or trying to win more than $500 (the Mixed, the Travellers, Senior Provincials, Juveline championships, Cashspiels), then you need to buy yourself some legal pads.  If not – stop reading and go have fun!!
Sounds simple right?

The challenge for this lies in open spiels that are kind of in-between serious and recreational.
For example, a spiel with 32 teams, $300 entry and let’s say a $1500 prize for first place. Typically this spiel might attract a few “competitive teams”. So you have some  team playing with the mustard yellow - legal pads. But you will also have a team of 4 recreational curlers who put their name in last minute and are playing with whatever equipment they have. It seems wrong to tell these guys they need to go out and buy $120 worth of new pads just to play in this tournament – and I do not think most people would complain if you played this team and their semi-legal brooms. The fact is - this level of spiel is usually just trying to find 32 teams willing to play - telling them that they now have to update their equipment will likely further discourage the marginal teams from even playing.

The really tricky part is teams that fall in-between. They are kind-of competitive, they might have a big sweeper, they have watched a few slams so they understand how directional sweeping works. They now find themselves playing a more serious team that has chosen to play with legal pads. Predictably – this is the type of game where there will be problems. We have already had a few issues in Open spiels in Quebec this year, and expect more to follow. Not sure what the solution is - but don't be an asshole seems like a good guideline!