Thanks Lethbridge, and Let's not let the Arsonists write the fire safety rules

I am back from Lethbridge, struggling to jump back on the moving train that is my life after escaping into curling nirvana for 10 exciting days. The Brier this year, and everything leading up to it has been an emotional rollercoaster.

First, I was not supposed to even be on the ride. I had said that I was stepping away from the game back in November, only to find out that my team still needed me after my replacement went down with a wrist injury. After thinking my competitive career was at an end, I was called back into service.

We then won Charlevoix a few weeks later. I had never seen a team play so well. Felix was on fire, and everything was falling into place. I was back to practicing, and I could not wait for a week at Provincials with my team.

But then, a wave of Covid hit. Events cancelled. Clubs closed. And provincials delayed. I spent January throwing practice rocks into empty houses, once again prevented from practicing as a team, all for provincial that was looking less and less likely to occur.

We were in a very awkward spot. We were without question the top ranked team in the province by a pretty wide margin (if you go by the national raking system), but we were told that if there were to be no provincials, there would be a selection process to pick a team to send. And who knew what that meant.

I know it sounds self-serving or disingenuous to say that we wanted a provincial, but we absolutely wanted a provincial. We wanted to earn our spot at the Brier, and we honestly believed we would win it fair and square. Also, I know that the intensity and pressure of a Provincial would be a great way to prepare us for a week against the country’s best. And if somebody beat us at provincials, then so be it.

If my house was on fire, and I had to choose a single possession to save from the flames, it would be my purple heart from 2018. (A Purple Heart is the crest given to provincial winners). That crest represents years of hard work and perseverance. I earned it. And I damn sure wanted to earn another one this year.

But instead, we were anointed Quebec’s representatives. Some in our province complained at the choice, given that I had announced my retirement earlier this year. I think that is massively unfair to both me and especially my teammates, who worked so hard to get to the level they are at, and who I expect to keep winning long after I am gone. I believe we were the right choice for the Brier.

Then, with the selection process behind us, we then found out that Martin had contracted Covid, within a week of us leaving for Lethbridge. Our last week was spent learning about CT levels, isolation protocols and incubation periods. Not exactly the ideal pre-event prep.

We found out all of 6 hours before our televised game against arguably the Best Team in the World that Martin would even be able to play. We struggled to find our legs against Gushue in that game, and got thoroughly schooled. We then won vs. the Territories, then got demolished again, this time by Brad Jacobs.

We then lost a game that we should have won. We played a brilliant game against Jason Gunnlaugson, only to blow it on a very bad call that will haunt me for many years to come. We dropped a game to BC where we should have been better. We finished strong against Nova Scotia and Manitoba, and got the added bonus of having our last 5 ends televised, as we put together a crafty 4 in the 9th end to knock Mike McEwen into a tie-breaker.

In the NFL, there is an expression that says: “You are your record”. We were 4-4. We could have won one or two more had we been sharper, and we could have lost one more had our opponents been better. All in all, 4-4 is fair for how we played. We finished a game out of the playoffs.  Unfortunately, I felt like we were finally hitting our stride as the tournament ended for us.

A few other observations/stories from the Brier:

Here we go again. As predictable as the spring, Curling pundits and some TopTeams will now call for sweeping changes to the Brier.  They will poo-poo provincial representation and point to the crappy records of the weaker provinces / territories as proof positive that the current format is broken. Kevin Martin & friends will wail on poor Nunavut, and point out that PEI, Newfoundland and the Yukon only managed one win apiece, all against each other. They will talk about the “entertainment value” of the product being the main goal, and point out that residency restrictions put limitations on our best teams.

In short they will call for the Brier to be better, and point to its declining ratings and attendance as proof that the current format is broken.

This is like the arsonist who set fire to your house giving you a lecture on fire safety.

I call bullshit on this need for radical change.

Yes, the Brier is at a crossroads. The consensus seems to be that change is necessary, as attendance and TV ratings continue to decline. (although I suspect this year’s attendance issues are likely more about Covid than lack of interest)

We all agree that making the product more entertaining will help, but where views differ is on how to get there. Some would say to make the Brier more exclusive, with only the top tour teams invited and limit provincial reps. Others would have the Brier go back to its roots, and be an event only for “amateurs” (like the US Amateur is for golfers) and discourage the pros from even playing. I think moves in either direction would hasten the decay of the Brier.

I am of the mindset that the current format/number of teams seems like a good compromise. They say the measure of a good compromise is that nobody feels satisfied, and this seems to be the case here. You have provincial representation, but you have some spots available for the hadful of "pro" teams. Perhaps the only change I would suggest would be to include the Wildcard teams BEFORE the provincial playdowns. This would help grow the game in places like Newfoundland and Northern Ontario, by giving more teams a hope of making it, and give the stronger provinces more representation.

In short, the current format is not perfect. (I would also suggest that new playoff format is unnecessarily complicated). But removing provincial representation will kill the event. Look at a team like Colton Flasch this year. Look at the pride they take in wearing the Saskatchewan green. Look at McEwen with the Manitoba Buffalo on his back. Provinces are what made the Brier into what it is, and are still an essential part of the show.

But we also need to ensure that the top teams in the country are part of the solution. A Brier without the best teams is not sustainable. It would be destined to become a Tier B event if held only for the "amateur" teams. 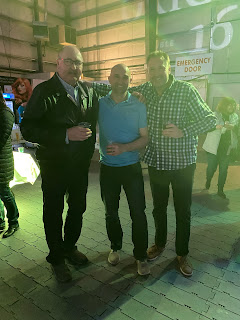 I was lucky enough to spend some time chatting with Gerald Shymco at the Brier this year. For those of you who do not know Gerald, he lost the Brier semi-final to Guy Hemmings on an amazing draw to the pin in 1999. Gerald is what the Brier should aspire to be. His love for the game, his genuine love for the traditions and his disdain for how the game has evolved should give pause to all curlers screaming for change. The Brier works because it is the one event that is still bigger than the players. It still draws thousands of fans (and volounteers!) and can produce moments like the one he had with Guy in 99. (here the link to the shot, and watch the post-game bear-hug he gave Guy after losing to him).

A few other points:

Anyway, as I reflect on my 3rd and hopefully not last Brier, I am just so grateful for the experience.

A giant thank you goes out to those who supported us throughout our journey, both our sponsors and our fans. Thanks to the volounteers and fans in Lethbridge that helped make the event feel like the Brier after what has been 2 long years.

The Brier is a tradition that I grew up watching and aspired to my whole curling life. The chance to be a part of it again is something I will remember forever.