An Indecent Proposal: let me sponsor your golf/curling tournament.

In the classic eighties movie Indecent Proposal, Robert Redford offers Woody Harrelson a cool million bucks to spend one night with his wife, Demi Moore. Many of my favorite sports now find themselves in the role of Woody Harrelson, wondering if the big cheque you are getting is worth having some creepy dude screw around with something you love. 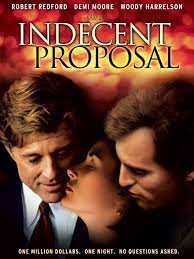 I have been a sports junkie my whole life. Whether its playing, watching, discussing or watching sports movies, I have always thought that sports provides a great common reference point for us all. Sports has become the new religion, it often provides us with role models, and I have always loved the challenge of having to deliver under pressure. It has what has made me love watching curling, watching golf, or pretty much any other game where dedicated athletes have trained to put themselves in a position that is compelling to watch. I love the drama.

But lately, I have become a bit disillusioned by some of the implications of money and sponsorship in the sports I love to watch. Hey, I get capitalism. I am all for athletes getting paid. I understand that money and sponsorship allow sports to reach a national audience. But damn, the last few weeks have been tough on the sports I love, and the influx of questionable money is making it harder and harder to be a fan.

Some are excited by the influx of cash – but I find myself asking myself if we are willing to take money from anyone? And is it making the sports better?

First, let’s talk golf. In case you have not been following, let me fill you in. The LIV golf tour, created by a disgruntled Greg Norman has begun poaching away golfers from the incredibly lucrative PGA tour by offering them insane amounts of money. Phil Mickelson, whose best days of golf are likely 20 years ago, was offered 200 million to leave the PGA and play in events that look more like a charity pro-ams than golf tournaments, with a few other top golfers. The money is being fronted by Saudi Arabia, who apparently are compelled to drop billions of dollars into golf for no other reason than to show that they can. Some call this “sportswashing” their money -  trying to help out their country’s tarnished reputation as a religious autocracy with a sketchy human rights record by transforming it into “magnanimous sports promoter”.

Some of the game’s best are cashing in. Dustin Johnson, Bryson Dechambeau, and likely Brooks Koepka will join the tour and cash in, reportedly receiving amounts in the hundreds of millions just to show up. I guess I get it. If someone offered me life-changing money to go and curl (not likely), I guess I would take it. But golfers like Tiger, Rory, John Rahm, Jason Spieth and Justin Thomas have turned down the money, saying that history, legacy and competition are more important to them.

It’s easy to judge the sell-outs. They have no heart, no soul and no appreciation for the PGA tour that made them rich and famous. They now have enough money for their 2nd yacht, another private jet. It is hard to cheer for multi-millionaires, who had more than any of us will ever have, who now need MORE money. But they are not the problem.

My ask is why would anyone want to dump billions of dollars to create a tour to rival an existing tour? In marketing, they say if you can’t tell what someone is selling you, then you are the product. The Saudi Sovereign Wealth Fund is buying credibility, image and wholesomeness. They know their target market: they want rich, western citizens to know them and like them. Golf gives them that. Phil and DJ give them that. The financial model of giving away that much money cannot possibly make sense. This is not about business; there is no way this tour would be financially viable; its revenues will be but a fraction of the amounts it is paying out. It is all about spreading wealth to make people like them.

Of all the uses I could think of for a few billion dollars, giving it to wealthy PGA tour pros is at the absolute bottom of my list.

The PGA Tour, love it or hate it, has created a feeder system to develop the grassroots of the game. It is also a true meritocracy; you have to earn your way in and you have to keep playing well to remain. It is hard to get there, and it is hard to stay there. That is what make me appreciate the athletes who have made the choice to be that good. LIV golf is a showcase, providing guaranteed money to players.

In no ways does the LIV golf tour make golf better for the fans. Idon't know how all this will end - but I guuarantee it will not end with a "and they made the game of golf better and all lived happily ever after."

From golf to hockey…

I was watching ads for sports betting the other night. Oh wait – I was actually watching the Stanley Cup playoffs, which has seemingly become an informercial for sports betting sites. There was commentary on the betting. And then “celebrities” talking about their bets. I now know what a parlay is. I now understand odds. How have I lived this long without being able to engage in state-sponsored gambling?

I get it. Betting on sports can be fun. Dropping a few bucks into a hockey pool is awesome. Betting with your friends, awesome. But sports betting always comes with an ugly underbelly. We know that gambling is an addiction like many others, and can ruin lives. So the incessant marketing of this, making us feel like there are riches to capture if we only play, normalizing gambling as something we all should do, feels wrong, and way over the top.

Which brings me to curling.

Curling Canada just announced its deal with Pointsbet Canada, and has created a new event: a March madness-style, single-knockout spiel in NB next September. Don’t get me wrong; I love the idea of trying new formats, and creating new events. And admittedly, this format sounds compelling, apart from making teams fly to New Brunswick for the possibility of being out in one-game (I believe they are giving the invited teams $5000 each to play to cover travel). The prize money is pretty big as well. They are also inviting the reigning Junior and Club (amateur) champions to play. And they will of course have sponsor exemptions.

But here is where I have a few problems with this.

·       Sports betting start-ups in Canada are using the same technique as the Saudis; they are normalizing their existence by throwing money at a sport with a good reputation for being ethical.

·       Gambling in curling is fraught with the potential for fraud. I blogged about this last year – and got a lot of feedback from people calling me a Debbie Downer for pointing out what seems to be obvious: there are serious motivations for teams to manipulate the outcomes of games to win or lose bets.

·       Inviting a junior team to an event sponsored by and encouraging sports gambling? Kinda sketchy.

Sports betting has always had problems in sports where the money being bet is misaligned with the money being made by the participants. For example, in the US, betting on college basketball had a massive points-shaving scandal, as the athletes do not get paid, but the money wagered was HUGE.

This is the wrong direction for Curling Canada. For an organization that has done so much good work of late to encourage inclusiveness and diversity in sport, the move towards gambling and monetizing the game is outside of what they should be doing, or sanctioning.

I can hear you reading this and calling me an old-fashioned stick-in-the-mud, and I hear you pointing out that the game used to be sponsored by tobacco and other vices. But it isn’t anymore.

Like golf, part of the charm of curling was that it has a solid ethical message built into its traditions and heritage. Players call fouls on themselves. We shake hands at the end of games. We say “nice shot” to our opponents. The unholy marriage with the sports gambling industry just does not fit.

I know that sports today is all about business. I am in no way naïve enough to not recognize that money is hard to say no to, and money is required to make bigger events, bigger purses and generate interest for the games. But if we truly love our sports, I expect us to be able to recognize that money never comes in for free; it always comes with expectations and conditions. Whether its hockey, golf or curling, the recent influx of questionable money is a threat to the very soul of these games. That is why it just feels so wrong to many fans. And just because it’s now legal does not make it right.

To be honest - I can't remember how Indcent Proposal Ends, but I am going to guess that it is not "he took the money and they all lived happily ever after".

Posted by Mike Fournier at 5:56 PM No comments: