"Kids - the Easter Bunny told me to tell you to shut up and let Daddy sleep 'til 9."

Easter weekend this weekend means it’s the Glenmore Intermediate at my home club. This annual ode to drinking and debauchery is a throwback to the old days of partying and curling. The spiel is equipped with Jello shooters, a drive-home shuttle, live music, bar-b-q, and I think some curling. An increasingly large contingent of Ontario curlers is making it an annual end-of-season pilgrimage.


Admittedly, partying and drinking on Easter weekend seems a little less appropriate now that I have a young family at home. “Kids, the Easter Bunny told me to tell you to shut up and let Daddy sleep ‘til 9 if you want any chocolate”.
I am not partaking in the curling this year, but will surely make an appearance for a party.
Also fun: hiding the Easter Eggs after a night out drinking, that way you can be as surprised as the kids when searching for them the next morning.

I am very glad I curled in Kurling for Kids this weekend. The event raised well over $200 thousand for Montreal  Children’s hospitals. And it also just makes you feel good. Highlight was Glenmore K4K organiser Stan Fong (one of the nicest guys in curling) trying not to get choked up while struggling through his thank you speeches.
Let me make this commitment now before I drift off in to a summer thinking about all things not curling: Stan – next year I am on your committee! Do not let me escape with a weak-ass excuse like “I am curling in the mixed”, or “I am taking care of a newborn.” 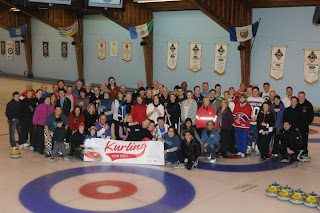 Random thoughts about the World Curling Championship currently underway in Basel, Switzerland:
- Ok- there are some decent teams at the worlds – but watching a few games on TV makes me think that my mixed team would probably win 3 or 4 games there.
- The French skip – Tony Angiboust – looks like a giant raccoon. He is furry, and apparently went skiing in a tanning salon with giant goggles on. If he gets any oranger, he can fill in for Youppi at Canadiens games. 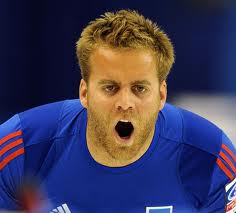 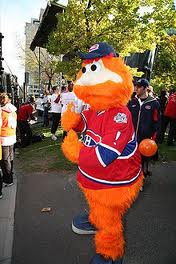 - Sorry to see Heath “Heater” McCormick struggling. Heater is well known to Quebec competitive curlers – he was often seen at Charlevoix and Ottawa area spiels back when he curled with Canadian guys. He is hilarious – and always makes more shots than you think he will.  Small piece of trivia: who was the last skip that Savill and Laing played for before joining up with Glenn Howard? Answer – Heath McCormick!
- Love the Norwegian pants. I am thinking my blue and white checkered pants (see profile pic) will make an appearance at the National Mixed next year.... 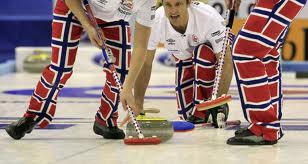 
Some news and speculation on the Quebec men’s curling scene:
It is looking like most of the top teams in Quebec are staying together this year (or at least I have not heard it if they are not). Remarkable, and unheard of on the Quebec scene. Lemay, Ferland, Menard and Desjardins all seem to be staying put (although I am not usually the first to know if they are making changes). However,
- Serge Reid is apparently taking a step back from curling, leaving Team Reid and others in the Saguenay scrambling to find a new leader.
- Not sure if Frank Gagné will be back, after having to sit out a few games at provincials with a recurring knee problem. Hopefully he will not hang up his shoes – but curling in pain is surely no fun.

Shout out to Lauren Steventon and Team from Glenmore, who lost the final of the Masters (60+) National championship to Newfoundland last week. It was a nice run; Lauren was in the finals until giving up a 6-spot in the 6th end. These guys still have a lot of game, for old guys. I hope I can still curl that well at 60 (actually, not sure I curl that well now).

Check out the Curling News this month. It contains a full page column from yours truly, a collage of blog posts from earlier this year. Appropriately, my column runs on the same page as an ad for Loudmouth Golf Pants (makers of the infamous Norwegian curling pants).
The Curling News can usually be found lying on the tank of the toilet in the men's washroom at your nearest curling club - or the on-line version can be found here:
www.thecurlingnews.com
Posted by Mike Fournier at 9:59 AM 4 comments: