This is Mike Fournier Reporting for Muppet News - no wait The Curling News!


The Scotties will be starting next week in my home town of Montreal. I get to cover the event as a member of the media, blogging for The Curling News. (Must remember to not blog under the influence). I will try to follow the lead of my favorite journalist: 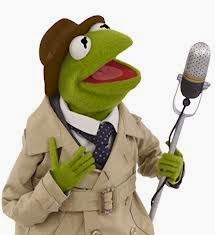 I am guessing that the organizing committee and the entire Montreal curling world are pretty much holding their breath right now, hoping that people will come and see the event.

It is being held at the Maurice Richard Arena, next to the Olympic Stadium is the East End of Montreal. The big question on people’s mind is: will anyone show up?
I am sure the traveling curling crowd and the local curling fan base will guarantee at least a few thousand in the crowd, but I am struggling to see where the rest of the crowd will come from.
Montreal curling is in a state of decline, but there are good news stories and signs of hope. Three or four curling clubs are doing relatively well in terms of membership and participation (including my own), 4-5 more are doing “okay”, and the rest are suffering. Many clubs know that their days are numbered; some are artificially kept alive by the municipality that owns or runs them.

So the question is: how many people will come out and support the event? The challenge that Montreal will face in drawing fans is mainly one of distraction. Unlike a lot of smaller cities that usually host the Scotties, Montreal has a lot going on, and the media here do not give a flying@##?& about curling. So just getting the word out that the event is happening is a monstrous challenge. The English media is a little easier to penetrate, but they speak to a relatively small audience. The hockey and boxing-obsessed French sports media in Montreal will likely not devote much effort to covering the Scotties, although I hope I am wrong. I am sure RDS (the French TSN) will be on sight, unlike their usual studio-bound coverage where Guy talks over the TSN feed. God help us if Michel Therrien gets fired the week of the Scotties – you would not hear a peep about curling anywhere except my blog!

The week will provide us an opportunity to see how good Curling Quebec and the CCA will be at creating some excitement in the French media. So far, I have seen some easy to overlook ads in the French papers, and my Facebook always seems to tell me about the event in the ads section (I assume this is because I “liked” curling or something similar). But I am curious to see how the local media is brought into the event. Hopefully they will get the morning shows out to try, and promote the event through media activity. The National Mixed at TMR a few years ago was a much-smaller scale success, with a decent number of attendees and some well-planned media activity.

If you are in Montreal – go watch some games! Experience the atmosphere of a National Championship. You will not be disappointed! You Gotta be There!  (and if you need a place to crash, I have an air mattress in my attic!)

My blog before Christmas “What the Olympics have done to Competitive Curling” has certainly generated a lot of discussion. I even got a response from Nolan Thiessen – lead for Team Koe. Here is the link.
www.teamkoe.ca

Just want to clarify:
I do not begrudge the top teams in Canada for reaping the rewards. I know how much hard work and sacrifice is involved in competing at that level. But I still maintain that curling cannot just be about 10 teams – and resources should be spent accordingly.
And please do not get me started on the Continental Cup. That was just painful to watch. I am a diehard curling fan – and I was at Provincials with lots of time to kill between draws and nothing else to watch – but it was PAINFUL. I don’t care if it is another 25 hours of curling coverage on TV. I don’t begrudge the teams that played in it – hell if the CCA offered to fly me to Vegas for a 5-day party, I would say Viva Las Vegas, pull out my Elvis suit and hit the strip faster than you can say “Hit Me again Mr. Dealer!”, even if I had to curl mixed doubles with Rachel Homan. But I say again – it WAS PAINFUL.
I admit I am not always in the know, and if anyone wants to correct me - please do, but I have heard from "people" that the Continental Cup and the Canada Cup cost the CCA money. Not sure if the move to Vegas helped, but I am assuming not. I still find it hard to believe that this is the best way to promote the growth of the sport – or even the development of the elite. I just don’t get it.

As I post this blog, my buddy and Mixed bromance partner Greg Balsdon is 6-1 at the Ontario Tankard – and playing Glenn Howard this afternoon.  GO BALLSY!!! I think I will put my Balsdon shirt on around the house today.
Posted by Mike Fournier at 12:20 PM