It was time for our annual curling road trip to a faraway place to curl. This year’s exotic destination: Val D’Or, aka the City of Gold!
For those of you uninitiated in the complexities of Quebec geography, Val d’Or in located in Abitibi – about 6 hours North-West of Montreal. To get there you actually have to drive through about 3 hours of no cell phone coverage! The horror. We actually had to listen to music and talk with each other! How old school.
We were playing in the Air Creebec Nord Ouest Open – a relatively new event (I believe this is their 2nd year). The event managed to draw most of Quebec’s top teams (except for JM Ménard was on his own road trip – to Summerside PEI to play in the Olympic Pre-Trials). This event is actually a pretty cool idea. Their goal is not to service the “elite” curlers, but instead to help develop the sport in the region. The format reflects this. They mixed up the elite teams into 5 pools of 5 mostly local teams. The top 2 teams from each section got to the quarters, but 4 of the 2nd place teams had to playoff to get down to 8 quarter finalists. The top third place teams got to play a consolation event. This format gave the local teams a chance to play against the big teams, but also gave them a decent prize pool to play for if they did not manage to finish 1st or 2nd. Teams also received 100$ per win in the round robin – so every game carried some meaning for the teams involved.
I like this format a lot – and I think it provides a great example of how to develop interest in the game at a local/regional level. It helps elevate the game for local teams, and lets them compete against stronger competition. It should serve as an example for a lot of regional curling associations looking to grow curling in their part of the world; hold an event! It bring in teams, media, sponsors and if run well can even make a few dollars for the host club. The Belvedere Curling Club in Val d’Or was full of people all weekend.

So how did we do?
Pretty good. We finished 5-1, losing the final to Bob Desjardins and his travelling band of curlers. We got outplayed in the final –we got down a few points early trying to figure out the ice and then Bob did not miss anything. But still a good tournament for us.
Some highlights from the road trip:


Baie d’Urfe
As I write this – we are 3-0 at the Experience IT Classic at Baie d’Urfe Curling Club – playing in the quarter finals tomorrow morning!
Fred Lawton runs a quality bonspiel, live music, free meals. Unfortunately Curling Quebec kicked him out of his usual time slot (the spiel was always at the beginning of December), and it seems to have hurt his entries. Hopefully he will find a niche for next season, this is a spiel that deserves a full set of teams.


Due to some unforced errors on our part, we only ordered our teams curling uniforms for this season in September, and we are still waiting for them. This explains why we look like a traveling band of hobos instead of an actual curling team, and why we have not posted a team picture of ourselves yet anywhere.
All this has made me reflect on the evolution of the curling uniform.
My first curling sweater was a red All Canada fleece pullover with black checks. We wore it to our first Junior Provincials. It felt awesome. Here is a pic. (Note that this team had awesome hair; a little Beatles on the left, some Jon Bon Jovi from the skipper!) Not sure why our lead was wearing jeans in this pic. (@John Cullen – how would you rate these unis?) 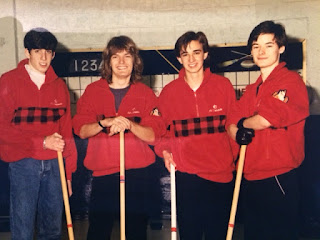 Since these long-ago days, curling wear has evolved considerably. Curling teams now all seem to be decked out in hi-tech, printed fabric sportswear – usually emblazoned with sponsor logos and yes – of course – numbers (!) and names.
The strange outcome of this is that a number of Curling-focused sports-printing clothing companies have popped up to take advantage of this trend. Dynasty Curling, Runback Curling, PCW, Hardline now all have the ability to make customized designs, with sublimated logos and designs. most of these companies are run by curlers. This has created a serious arms race, as teams try to out-jacket each other.


Makes me long for my red-fleece.

So as I write this, the Olympic pre-trials are coming to an end in PEI. Unfortunately, it was not Jean Michel's week; after a great start they dropped a couple of games that they seemed to be in control of and then finished a game out of the playoffs.

My buddy Greg Balsdon is still alive as I write this, and is poised to knock out Charley Thomas; hoping to see him squeak through, although it looks like Botcher, Morris and Howard are the favorites for the 2 spots at this point.

On the women's side, I think they will be playing tie-breakers until mid next week. Holy parity Batman!

Posted by Mike Fournier at 8:44 PM