- It is officially springtime in Montreal:

The winter dog poo is peaking out majestically from its blanket of snow; the Libya-like potholes cover the roads like acne on a teenager; and curling season begins its slow and agonizing journey into summer repose.

- The Brier is over. I must say - I already miss good curling on TV.
The finals were a bit of a yawn-fest- with Stoughton and team curling a ridiculously good game. The game was not even as close as the score indicated.
You have to feel a little sorry (just a little) for Glenn and the boys, who can now corner the world silver market with all of the 2nd place trinkets they have amassed.

The World Curling Champinships are not nearly as entertaining as the Brier and the Scotties - although Women's Worlds certainly has a number of very watchable teams- but not for the curling.
The World Men's is usually somewhat exciting, but Stoughton will likely be boringly better than most teams there. Given that the event is being held in Regina, likely with the same rocks as the Brier and on similar ice conditions - look for a relatively easy win for Canada this year.
The World's have produced relatively few memorable moments over the past few years, with the exception of the infamous Martin throw-through that surely will go down as one of the worse curling calls in history.

- The silly season is definitely in full swing. A number of rumours and strange team configurations are being discussed in Quebec and elsewhere. I will provide an update when the dust settles - but some big surprises are coming. Spoiler alert: apparently, making it to the Brier is no longer enough to keep a team together...

- I will try to blog a bit from the road this weekend in Toronto. I am heading up to curl in a drinking, eating and joke-telling festival (I think there is also curling...) with some guys from Glenmore. This is definitely not a competitive venture. Goal will be to not injure myself. The event is held at the Royals, organized by bunch of characters who usually make the trip to Glenmore at Easter for the Intermediate. Reciprocation is what I am all about.
You gotta love a spiel with a steak BBQ night and an Oyster party.
(Although the combination of raw Oysters in a men's only spiel seems somewhat homeoerotic and misplaced to me. Hope I am wrong)
Theme song for the weekend:  Spirit of the West

- The Seniors is on in Digby - last time I checked the Quebec team was 3-2, and leading in their game against PEI. Robbie and the boys are a solid team - would be nice to see them near the finals. 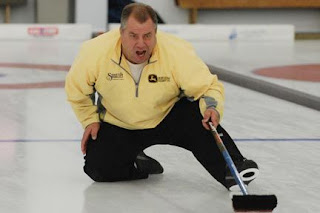 I noticed Brad Heidt is in the field. For those who do not know Brad Heidt, he is a Shrek-like character from rural Saskatchewan (I guess all of Sask is pretty much rural) who is famous for chewing out his 3rd in the 10th end of the Brier final. I have played against Brad only once, and it is as close to a curling brawl as I've ever been. This was especially scary given that his neck is about the same width as my chest. Too bad the seniors are not televised.

- I need to go shoe shopping. I know this sounds horribly lame, but I need a new pair of curling shoes, my Asham's are coming apart at the seams. Anybody have a good recommendation? Keep in mind that I am a toe-tucker who uses about 2 inches of his slider...I am seriously considering buying a decent pair of shoes and making myself a pair...
On a related topic, I am not a big fan of the $300 curling shoe movement that has emerged in the last 5 years. I think curling is going the way of the $500 driver and the $60 per dozen Titleists in golf, with some ridiculously expensive "innovations", that really don't help people curl or golf any better.
Having said that, I slice and pull hook with a $500 driver and hit my Titleist Pro Vs into the lake/woods as well. I blame marketing.
Posted by Mike Fournier at 6:04 PM