What have I done to incur the wrath of the curling gods?
We lost out in the C-semis at the Mac Ice, tantalizingly close to qualifying, as my final draw to win in an extra end mysteriously picked up some piece of crap and spun haphazardly into the guard (despite the fact that my front end was sweeping it at the time).
Argh. (as I write this, I am flipping the bird to the curling gods).

I think my team needs to perform a ritual sacrifice of a live chicken or a virgin (although virgins are hard to find in a curling club), in order to earn the favour of those Gods of Curling that decide the fate of mere mortals.
The sad fact about curling is - that as much as we practice, prepare and perform, sometimes you lose anyway. And often in a seemingly unjust manner. I guess this is true in life as well as in curling.

On the bright side, we are curling pretty well. Results will come. I like to think that over the course of a season - good luck and bad luck always tend to even out.

***
The actual tournament was won by JM Menard. A good result for those guys - who are looking strong and determined so far this year.
Not a lot of strong performances from other Quebec teams - apart from Ferland and Kim Mastine who managed to make some money in Ottawa as well.

***
As promised, the draw for the weekend was horrible, we often had ridiculous layoffs between games. In the end, we played 5 games in 4 days, and had massive amounts of time to kill off in Ottawa. I keep swearing that I will not go back to this tournament, but the money is good, the competition is good and the ice is good, which is why it always seems to draw the top teams from Quebec and Ottawa despite the draw.

***
Next weekend is the casino Lac Leamy Challenge cashspiel in Gatineau, arguably the best and biggest event East of Ontario. Some notables will be there: Gushue, Matchett, Menard and all of the big Quebec, Ottawa and Maritime teams.
Should be a fun weekend. Dany Beaulieu and friends have done a great job building a top-notch spiel in a short period of time.

Draw and results are at:
http://www.challengecasinolacleamy.com/

***
The 2012 Women of curling calendar is out (  http://www.womenofcurlingcalendar.com/ ). This is a fundraising calendar that features relatively naked curling babes set in seductive yet tasteful poses.
I have not seen the content yet, but the cover features the exquisite Eve Muirhead of Scotland posed seductively in a tartan skirt, with a curling broom, golf clubs and - wait for it - a set of bagpipes. 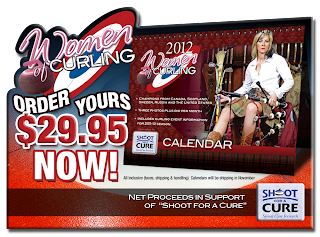 (I am thinking the calendar will surely inspire some to play their pipes as well,  if you know what I mean.)

By the way - Dear Curling Gods:
I sincerely apologize for my flippant remarks earlier - they were a joke! - and I sincerely hope it does not influence You to allocate any more bad luck in our direction.
I am currently searching on-line for a live chicken - and inquiring as to the sexual experience of people at our curling club in order to perform the necessary sacrifices to pay homage to You.
Thanks for your continued support!
Posted by Mike Fournier at 4:53 PM