A Guest Blog: JM Ménard shares his views on the Brier

This is a new one for in the house:
A guest blog! From none other than the 2006 Brier champ - and the asshole that beat me in the Quebec final this year (and the Semi-final last year in case you are keeping track!)
But happy to turn over my space to him -  so enjoy!
In a previous blog I mentioned I was hoping to go to the Brier before it becomes the 8th slam...JM says I might be too late! 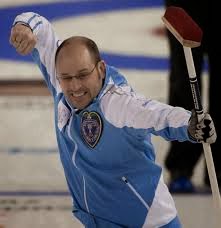 I’m writing this letter because I’m worried, worried about the long lasting relationship I’ve been fortunate enough to have had with you. The first time I became conscious of who you are was at the age of 13 (1989 Brier in Saskatoon). At that time, I was just starting up in the sport and was quite amazed with the coverage of the event. The more I was watching, the more I was getting into it… In the following years, while most kids were playing outside during March break, I was in my parents basement following this great event then heading to the rink to practice. I had a dream slowly building in me: Playing in the Brier one day.

It was an ambitious dream, and I quickly realized that lots of work and hiccups would happen along the way. Sacrifices would be numerous, but I could simply not stop before giving it a fair try. Finally, in 2003, my dream became reality; the Brier invited me to play!!! Including this year, I also had this precious invitation delivered to me on 8 occasions and feel blessed by these opportunities. You also allowed me the ultimate prize in 2006; handing me your precious Tankard and engraving my name on it.

I’ve always had the utmost respect for you but I’ve been noticing some changes over the past few years and as a friend, I find it my responsibility to let you know how I feel. I won’t be talking about the relegation as you already know my position on this (it shouldn’t exist…) but more on how the event is run. We used to be treated like Hollywood Stars for a full week making it difficult to go back to a normal lifestyle.  The event lived up to the expectations that had been building in me since my childhood. Now the event is looking more and more like your typical World Curling Tour weekend event. If you allow me, I will point out the numerous changes I’ve witness over the years:

Transportation: Until a few years back, every team had two drivers for the whole week, one driver for the team and a driver for the spouses and relatives. That was simply amazing and offered so much flexibility to team and family members. We also had the opportunity to develop a privileged relationship with our drivers. Now, we need to call a dispatch center to get a ride and family and spouses are on their own. With the dispatch center closing at midnight, I won’t even go on explaining how challenging it is to grab a cab when getting out of the Patch after midnight. I felt like Cinderella looking at the clock to make sure we got out of the building before midnight… When we arrived at the airport this year, my mom was traveling with us and the first thing she was told when arriving was: “Mam you’ll be on your own to get to the hotel”. What a great start to the event!!!

Rooms: Every team used to have 6 rooms for the full event, one per player (including the alternate) and one for the coach. This was simply amazing and it allowed each player to bring his family without disturbing other team members. Each room was also provided with a case of beer and a basket full of munchies. Tim Hortons coffee makers were also provided on a few occasions (a little challenging to bring back home but a great idea). Newspapers were also provided each morning on the step of our door. How great was it to start my day, a newspaper to feed on while conducting my morning business in the bathroom…

This year, we only had four rooms, therefore no family members decided to come over beside my mom. The active roster was therefore split in two rooms like we do in a regular curling event. As for the case of beer and the munchies, they’ve been a no show for a few years now and the newspaper is now non-existent meaning I have to modify my morning routine.

Per Diem: One of the great perks in playing the Brier was the allowance of a per diem to each player for the whole week. Until this year, it’s always been 850$ per player. This was so helpful and allowed players to play the whole week without taking any money from their bank account. This year, it was cut down to 550$, when you consider how many people WE, the players are bringing into the arena, it seems a small price to pay.

Sponsors Night-Opening Banquet-Closing Banquet: One of the highlight of a Brier has always been the Thursday night sponsor night. This was a great occasion to meet the sponsors and the other participants in a relaxed environment. An amazing finger food buffet was always present and beverages were free. This event is now, sadly, history…

Opening banquet: This aspect has not changed a whole lot over time but let’s say it’s not as glamorous as it once was. I remember the first few Brier’s I played in, we were piped in by a chorus of Pipers, now we are quickly brought in….. There use to be guest speakers and presentation of previous Brier winners, these days, there is an MC quickly conducting business…

Closing banquet: The closing banquet used to be after the final and was a final opportunity the meet our fellow competitors before heading home. A couple years ago, they switched it to a Brunch Banquet being held after the infamous bronze medal game (why the hell does that game exist by the way?) and before the final. It was a highend brunch with plenty to choose from. This year, they were charging 56$ for non team members for a buffet menu you could find at a local restaurant for 15$.....

Players lounge/room: At all the previous Briers I’ve had the chance to attend, there was a Players’ Lounge in the facility where players could socialize, eat, relax after a game. Back in the days, family members were also welcomed but that was cut short a few years ago. Last year in Kamloops, the Players’ Lounge went from being very comfortable and rooming to feeling like anchovies… This year: nothing, rien, nada...

Food between games: In the good old days, it was possible to get a hot buffet service or order food from a caterer between games. This year, we had two choices: a) Go to the main concourse of the Saddledome and have a Chili Dog or a greasy Double cheeseburger b) rush out of the arena after the game to get something to eat. Having tried option “a” in the past with limited success in games following this decision, we decided to go with option “b”. As you can imagine, Subway was a popular destination and I have yet to eat a submarine sandwich since coming back from Calgary. On the other hand, a visit in the officials room allowed me to witness they were provided with a hot food service and fresh baked pies…..

Jackets: In my first few Briers, jackets and team shirts were delivered to your room which was a classy move. The last couple of years, we have been directed to a room in the hotel where you are to pick up a box with your gear. This year, getting to our box was like going through a maze with numerous obstacles. We had to deal with Hotel employees not knowing what the hell we were talking about, wrong keys provided to us, closed section of the hotel were a janitor with all the keys needed to be called in before finally being able to get our stuff. There also the story of a team whose gear was misplaced and they started the Hot Shots on Friday with certain members of the team not having anything to wear….

I’m sure you now see my point, being invited to your event used to be the pinnacle of curling but as the years go by, I’m afraid all these good things we were once provided with will soon only be memories to tell our family and friends if nothing is done.